“The future of money is digital currency.” – Bill Gates, aka The Richest Man in the World

I wanted to take a moment to share this opportunity

with you because I think it is incredible.

Whether you’ve invested in Crypto-Currencies before or you don’t know the first thing about it, this is an absolute must-have:

I just discovered this and suggest you check it out immediately

Fearfully and Wonderfully Made

Critics cannot stop the true fact that GOD made you and me too. We come in all shapes and sizes, to be critical of another is against the will of God. Psalm 139:14 I will praise thee; for I am fearfully and wonderfully made: marvellous are thy works; and that my soul knoweth right well.

A Great Way to Read Your Bible!

1 – Less than 10% of all Christians have ever read the Bible all of the way through. Many have never even considered doing it, or thought it was not attainable for them.
2 – Most Christians have difficulty understanding many parts of the Bible. Although a few major Bible texts are familiar and well understood, large sections of the Bible remain obscure to the average layman.
3 – Because 21st Century life is so fast paced, many Christians have left meaningful devotional times with God out of their lives. That may be because they have not known how to confidently approach this subject.

The new program is “Through the Bible . . . as It Happened”. The person who uses this program will gain a much better understanding of Scripture because of how the program works and because of what features are included in it.

In short, it is a chronological reading of the Bible, with extensive helps included with it. Chronological means “in order”. The Bible as it appears in its standard form takes a “themed” approach to its material. The authors who wrote the Scriptures were interested in their particular situations and events. So they compiled their work in what we call “book” formats, subject matter being their guide.

There are 39 books in the Old Testament and 27 in the New. They cover a time span of 4,500 years and they are not neatly placed in the order that the events occurred. In fact, everything jumps back and forth. That makes it hard for the reader to comprehend much of what takes place and the relationship of events to each other is largely lost.
The author of the program. David Shreve, has re-arranged the Bible’s material so that it flows smoothly in order. Event follows event in the order in which they happened. That’s how most novels are written. From the beginning scenes, through the myriad of events, leading to a conclusion!

So, one of the great things about this program is how it works – that is its foundation.
But there are other chronological approaches to the Bible in existence. Some are simple general re-arrangements taking up no more than a piece of paper. Some are complete hard cover volumes which take the Scripture text and re-arrange it within the volume.

What makes this program stand out from them?

1 – The re-arrangement itself. The author began this effort in 1974, long before any such materials existed. Through the years, as he read through the Bible each year himself using this program, he researched and compared – and revised – and revised – continually, until he released his program to the general public in 2018. There is probably not another chronological program this thorough in its development. Getting the order of events exactly right was a priority for him and a painstaking effort – and the results prove the value of that effort.
2 – The study helps which are included. It is hard to find a chronological reading program which explains some of the more difficult-to-understand portions of the Bible. Most simply attempt a re-arrangement of the Scriptures and let it go at that. That’s not enough for most laymen. They need some good, solid explanations of material they are reading.

Mr. Shreve is degreed in the Bible and has a minor in Greek. He has spent his life studying the Bible, from his days at Cedarville University until the present. His library consists of hundreds of volumes in theology and Bible related books. His views are mainstream and evangelical. In the few instances where he diverges from orthodoxy, he alerts the reader that he is expressing a minor view. The reader doesn’t have to worry.
The notes are extensive, too. The project is over 1,200 pages, so not much is left out. He treats some of the Biblical material from a theological perspective and some from a devotional perspective. He feeds the head and the heart! This will definitely help your prayer life, because praying the word brings answers to prayers and so much life to your spirit, body and soul.

We all love America 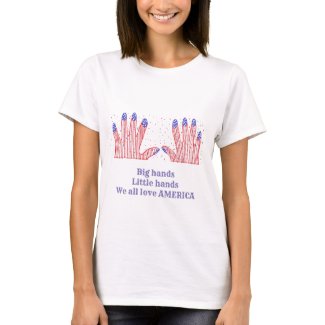 We all love America T-Shirt
by shelikes

Whether big hands or little hands we all love America. America ia an earthly blessing. We all live different lives, have different peoblems, we even sing a different song. But we are Americans and God has given us mercy for our behavior. Celebrate Americas’ 238th birthday with prayer and thanksgiving.